This paper comes from the 2017 ICCV,which introduce a method for image enhancement that is not related to deep learning.Here I summarize this paper’s content as follows:

In the previous,the enhancement can atribute to two main methods which is histogram-based methods and filter-based methods repectively……

The Over view of contrast adaptive enhancement method is illustrated as follows: 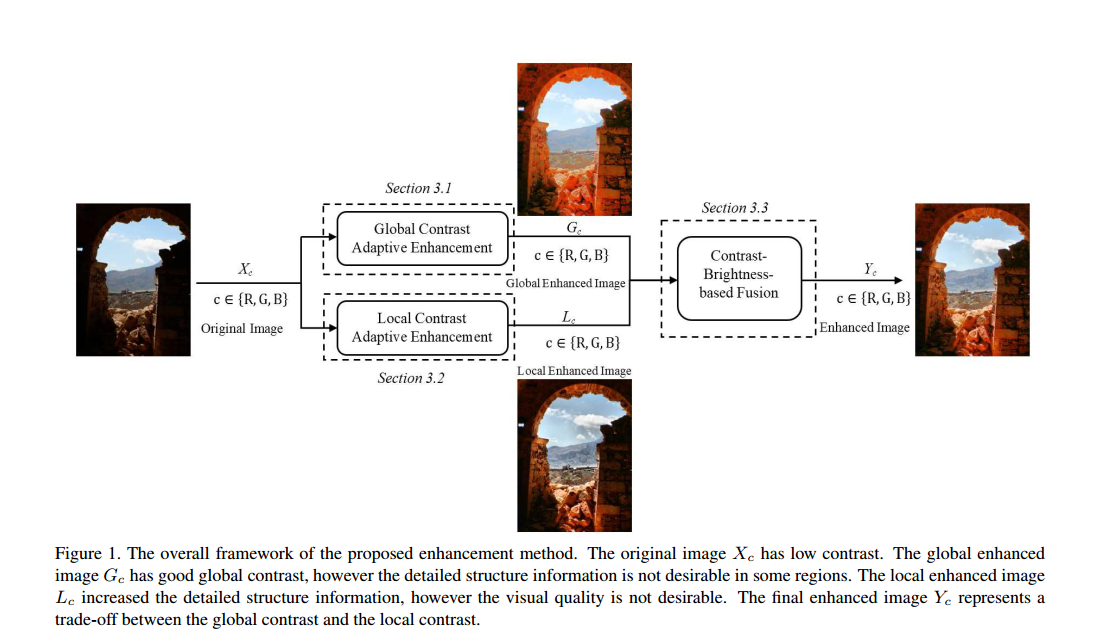 The global contrast adaptive enhancement method is shwns as follows:

The motivation of this step is that many image enhancement methods treat the three color channels respectively,which will change the hue of original images,so it is very important to preserve the hue component in images.Note that the two images with the values (r1,g1,b1) and (r2,g2,b2) have the same hue if the equation (r1,g1,b1)=a(r2,g2,b2)+d(1,1,1) exist.First,the value range of the input image $X_c$ is converted to the full range[0,L-1] with linear stretching:

where the $X{min}$and$X{max}$ are respectively the minimal and the maximal intensity values among the three color channels of the image $X_c$,and L=256 for 8 bit images.
The stretched image is converted to the corresponding intensity image I using the follow equation:

Then a novel contrast enhancement algorithm is applied to I to obtain the corresponding enhanced intensity image $G_I$,this method will be introduced later.Finally,it use the hue preservation enhancement framework to obtain the final enhanced color image $G_c$ with:

Here it is necessary to inroduce the Global Contrast Adaptive Enhancement for Gray Images.Usually the historam-based method obtains the corresponding mapping function to modify the pixel values and enhancing the contast of the considered image.The mapping function T can be shown as follows:

The problem of this mapping function may generate unnatural looking images.Since the article proposed a new method which means that the modified histogram h should be closer to the normalized uniformed historgram $h_U$ and the value of the residual $h-h_I$ should be small,too.Thus the problem of getting the optimal histogram $\hat{h}$can be shown as follows:

where the $\lambda$ can adjusts the trade-off between the contrast enhancement and the data fidelity.By transfering it to L2 norm,the solution can be showns as follows:

It should be noticed that the arameter λ needs to be carefully tuned for obtaining satisfied enhancement results.Since the goal is to adaptive enhance the contrast of the considered image,this article adopt the tone distortion of the mapping function T to guide the optimization,which can be shown as follows:

where $W_d$ is the weight map, $C_d$ is the contrast measure, $B_d$ is the brightness measure, and the operation min can efficiently penalize the corresponding low-contrast, low brightness (under-exposure) or high brightness (over-exposure).$C_d$ is obtained by a Laplacian filter, which can assign high weights to edges and textures in the corresponding image,$B_d$ is computed by a Gaussian curve,which can assign high weights to pixel values close to 0.5 and define low weights to pixel values near 0 (under-exposure) or near 1 (over-exposure).Thus,the weight map can be shown as follows:

Note the results computed directly usually contain the undesired seam problem in the
fused image, so it adopt a Laplacian pyramid method to avoid this problem. 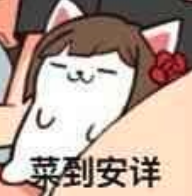